Commands to navigate through file systems you may have very likely seen before. Many commands have options associated with them. You can access these options via -option_name.

Special characters come in handy when trying to match patterns in files such as an example above where ls -l *.jpg will only return jpg files. The * character acts as a wildcard standing in for an undefined string. * will match any number of characters if you only want a single character to be wild use ? instead or [ ] for start and end character sets respectively.

Other important special characters include:

To avoid unexpected results from your bash scripts make sure you understand the difference between strong and weak quotes.

Use the commandcomplete -A keyword : followed by  : Space Tab Tab to get a list of all the shell keywords.

Control characters are not printable, they display in the terminal as ^ and are intended to have an effect on applications. 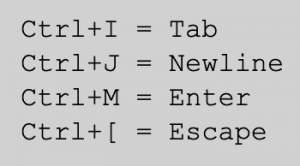