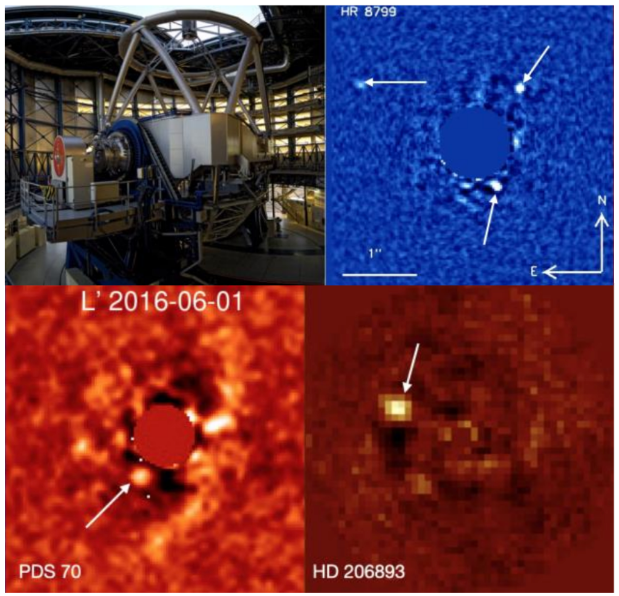 The Nasmyth Adaptive Optics System Near-Infrared Imager and Spectrograph (NaCo) is a high-contrast instrument previously installed on the Very Large Telescope (VLT) at Cerro Paranal, Chile. NaCo was one of the first instruments to directly image young giant planets and companions in newly formed solar systems (i.e. PDS 70), as it was the only L’-M-band imager in the southern hemisphere until decommission. Almost two decades of observations stored in the European Southern Observatory (ESO) archive are publicly available for analysis. As direct imaging of protoplanetary discs is an emerging field that is constantly evolving, this archive is ripe for applying the latest image processing techniques to detect embedded companions in young systems in a unanimous and optimal way.

As there was no satisfactory, open-source NaCo pipeline available, CI Iain Hammond and collaborators developed and applied a modular, object-orientated Python3 pipeline to several systems using Massive3. Iain primarily carried out this work over two years, with supervision from postdoctoral research fellow Valentin Christiaens and Professor Daniel Price, using functions of the pre-existing Vortex Image Processing (VIP, Gomez Gonzalez et al. 2017, Christiaens et al. 2023) package, maintained by Dr. Christiaens. They intended to process ~70 targets that are of key scientific interest, with an additional ~100 low priority targets. The pipeline was limited by a lack of parallelisation in many stages, throttling turn-around times for important source characterisation and detection limit steps.

The lack of parallelisation in the pipeline was becoming more pressing as the next generation of telescopes see first light and require observing proposals. In 2022A, ADACS allocated six weeks of time for profiling, tests, and benchmarking, however an additional ~8 weeks of effort is required to implement these optimisations. In 2022B ADACS modified the underlying VIP library to parallelise the three key functions that took 80% of the execution time for the NaCo pipeline. Once developments were completed, the total execution time of the pipeline was reduced by a factor of 6. For one of the target data sets the time to perform bad pixel correction was reduced from three days to just 4 hours. Since the modifications were made to the VIP library, this development work will have an impact on any projects using the VIP library, not just the NaCo pipeline.